With the release of the much-anticipated panto video, I wanted to share some photos and videos of the night and some behind the scenes footage, too! The experience of putting on this panto was something none of us will ever forget. I’m beaming with pride looking back on the amazing work that the class did and the consistent effort and time that they put into it. Well done, Sixth Class! 😃 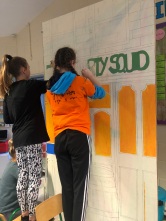 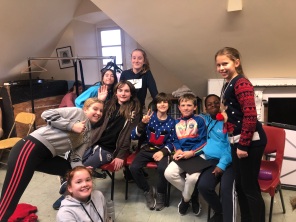 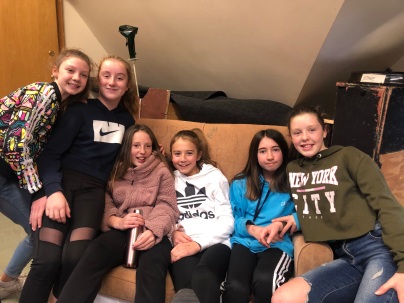 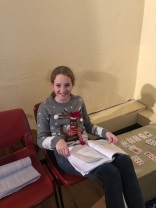 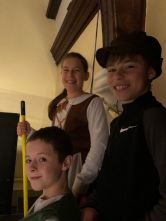 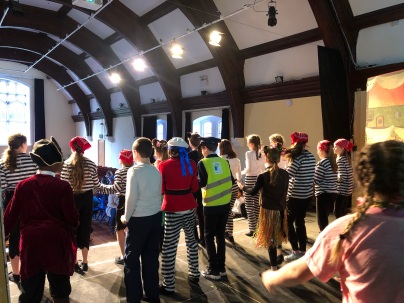 We recently learned the song ‘Sunglasses in the Rain’ by John Gibbons as Gaeilge! Take a look at the video below.

We were all really excited to see snow today in Sixth Class, even though it may have temporarily distracted us from our lessons! Unfortunately it didn’t stick today, but we haven’t given up hope just yet. ☃️

Our annual Mini Fair took place yesterday. In Sixth Class, we were selling baked goods and we split into groups to work on the stall. I was so impressed by everybody’s collaboration when setting up the stall, selling the cakes and tidying up afterwards. It was lovely to watch all of Sixth Class using their knowledge of money to quickly calculate change, and more importantly to see how kind and friendly they were in their interactions with the other pupils. Thank you to everyone who baked or bought something. I hope you all had a great day! 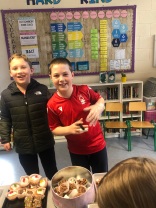 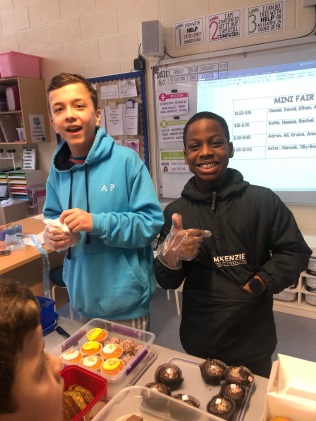 There’s no doubt that December was a busy (but fun) month in Sixth Class! 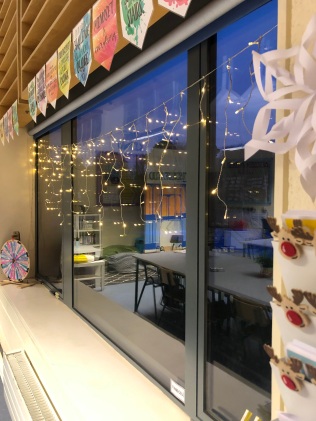 Take a look at what we got up to:

We had our class Kris Kindle 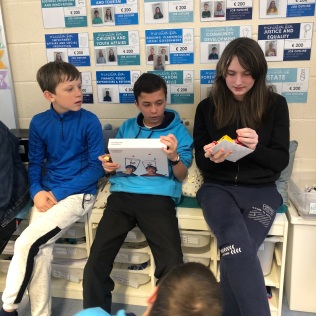 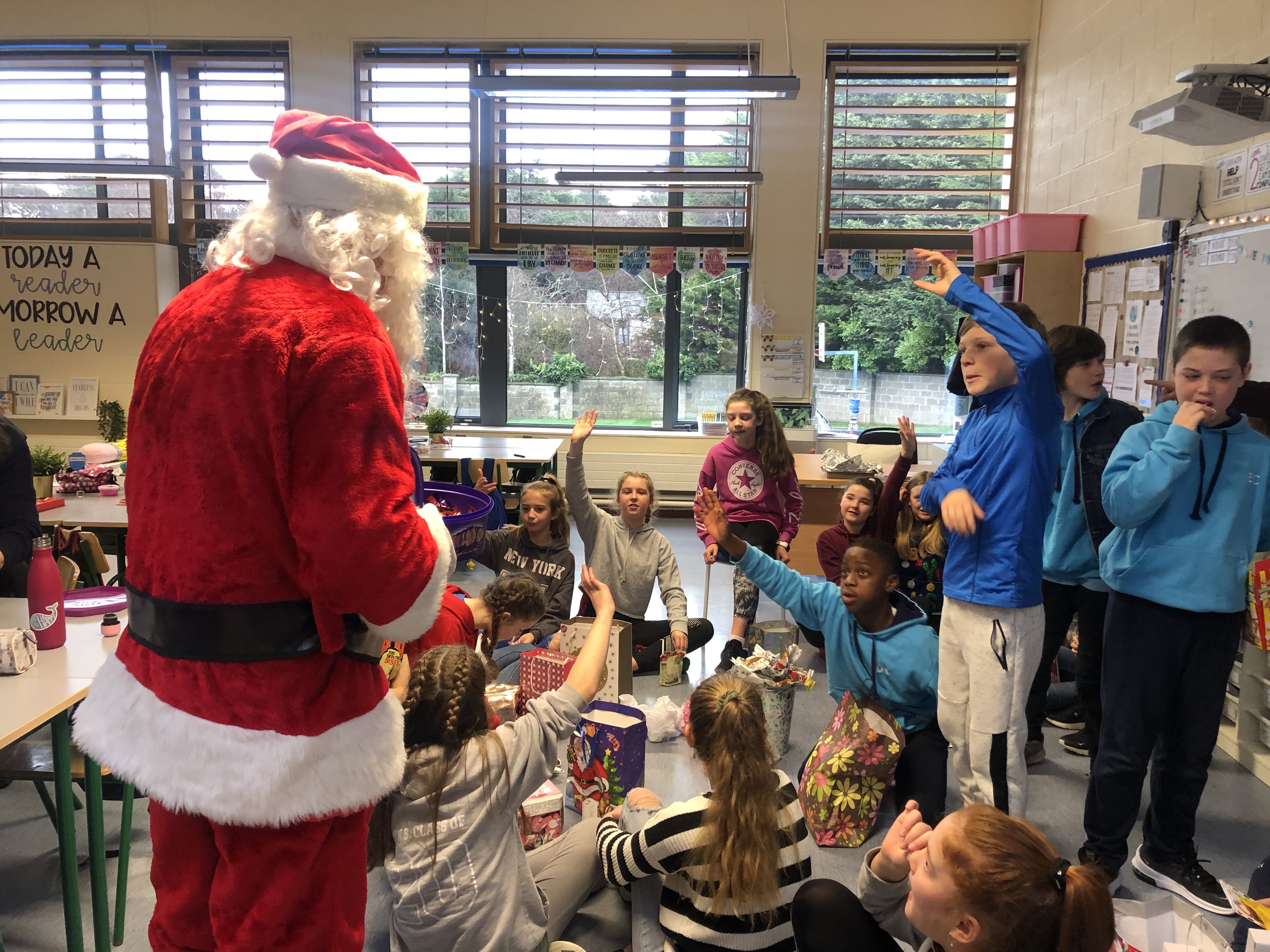 We read by the ‘fire’

We listened to the Christmas FM countdown

We decorated our class Christmas tree 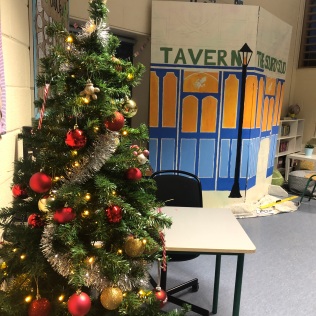 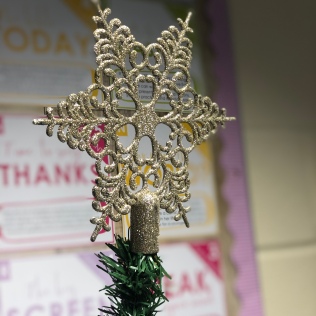 We had some interesting debates… 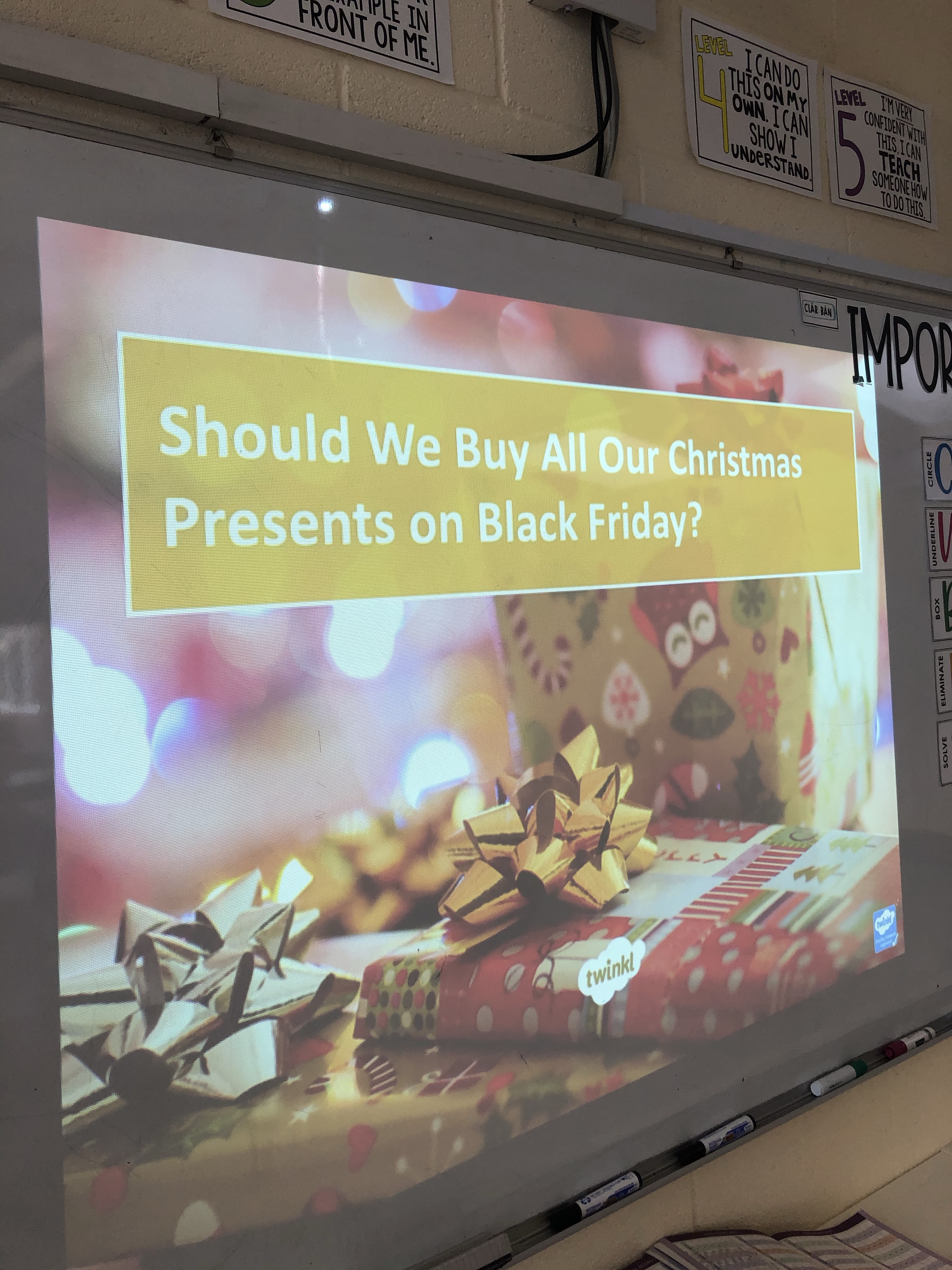 And, of course, I’m not forgetting our school pantomime! Stay tuned for a blog post all about Pirates of the Curry Bean!

On Tuesday the 26th of November, 5th and 6th class went to Ballyroan Library to learn about palaeontology (the study of dinosaurs).

We got onto the bus that the library had provided for us and left school at a quarter past twelve. We arrived very quickly. When we got there we went straight into the library and Ms. Masterson told us to take a seat. We were seated in a semi-circle and there was a table in front of us with loads of beakers full of chemicals. Then a woman came in and told us that her name was Science Sue. She asked us if we knew any dinosaur names ending in “osaurus”. A few of us put up our hands and named some. Then she asked for volunteer. Loads of us put up our hands but Naoíse got picked. Scientist Sue pulled a fluffy teddy dinosaur out of a box. It was on a uni-cycle with two weights on either side. Then she asked Naoíse to hold a string that was tied onto a coat stand and she placed the uni-cycle on the string. It didn’t fall off! The weights on the sides balanced it and it rode from one end of the string to the other.

She then asked for a different volunteer. Hannah from 6th class got picked. When Hannah was up Sue was telling us all about discovering dinosaur bones and that you had to be so gentle because they could break. Then she said that in case the real bone went missing, got damaged or was stolen, palaeontologists would make a copy. Then she said she was going to make a copy right in front of our eyes. She obviously didn’t have a real bone but she did have a tiny toy dinosaur. Sue got the toy and pressed one side into a mould. She put a few ingredients together in a bowl and asked Hannah to mix it. It finished as a green gloopy mixture and then Sue told Hannah to pour it into the mould.

After that, Sue told us a bit more about the diplodocus and then asked for another volunteer. Alex got picked. She poured some mixtures together and then asked Alex to pour one last liquid in. Then it started to bubble. She got a matchstick and lit it and then blew it out. She put it onto the foam and the matchstick burst into flames again. Sue said this was because the matchstick still contained the heat. That is why fire fighters don’t just have to get rid of the fire, they also have to get rid of the heat.

Then, Sue asked for another volunteer and Sophie got picked. In this experiment they were mixing vinegar with acids and the mixtures turned different colours depending on the strength of the acid.

Sue asked for yet another volunteer and this time David from 5th class got picked. He had to mix all the things that the Diplodocus might have eaten and then put it through a tube and all the nutrients came out because there was holes in the tube. Then he had to squeeze them all out into a bowl and that was meant to be the Diplodocus’ poop!

Then we went back on the bus and got back to school. It was home time when we got back. Thank you Ballyroan library for having us. 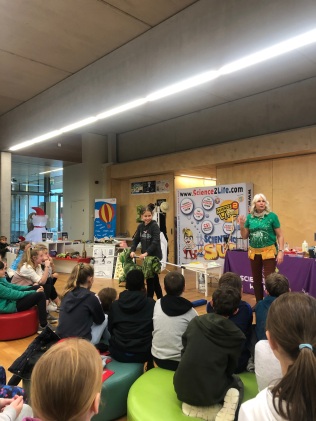 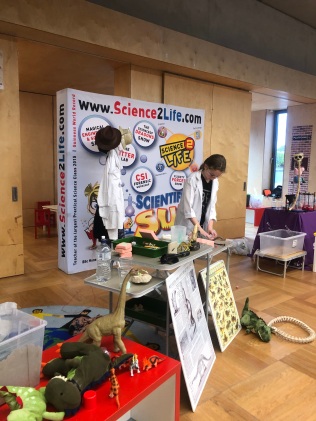 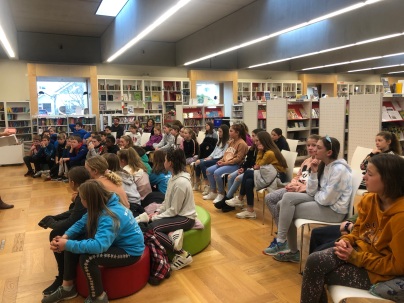 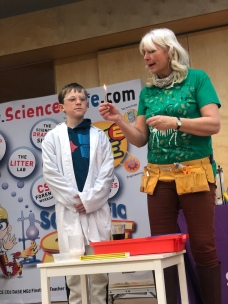 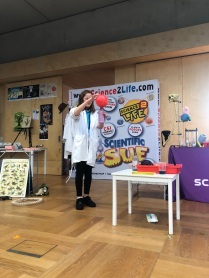 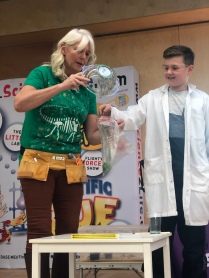 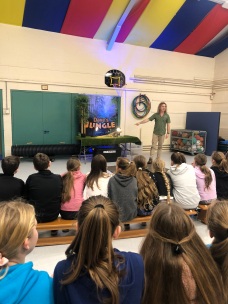 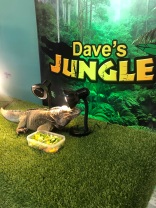 On Wednesday 27th November, a man called Dave came to our school. He brought loads of animals and when we went into the hall, we weren’t sure if they were real. There was an iguana called Phillis sitting on the table and he looked like a toy. First, Dave brought out a snake called Sharon. She was a Burmese python. We all got a turn to hold her. Then he put Sharon back and brought out Charlotte, she was a Mexican tarantula. We got to hold her, too. Then Dave showed us how she would hunt her prey. He took out a locust and put it in front of her, but she didn’t look like she was hungry. Dave told us that Charlotte only really ate once every two weeks and could last up to a year without food! Charlotte didn’t want to eat so Dave picked up the locust and PUT IT IN HIS MOUTH! After, Dave showed us his scorpion, Pinchy. We couldn’t pass him around but Dave said that Pinchy didn’t have much venom because the bigger the pinchers the less the venom, and Pinchy had VERY big pinchers. Then it was time for some amphibians. Dave brought out a toad called Bernard. He was POISONOUS! But we survived. The penultimate reptile was a snapping turtle. Dave showed us how she catches her food with her tongue. Then she crunched down on a carrot and it was TERRIFYING! Lastly, he brought out a CROCODILE! His name was Kevin and he was the world’s smallest breed of crocodile. He was very cute and he didn’t eat anyone, even when Phillis (the iguana, who had jumped off the table) walked right in front of him! At the end we got to pet Phillis and Kevin. Thanks to Dave and his jungle for coming in, we really enjoyed it!

On the 27th of November, Naoíse, Adam, Ethan and I went to the Maths Masters Quiz in St. Attracta’s Senior National School. We left school 🏫 at 12:30 and Naoíse’s mum brought all of us, thank you!😊 When we arrived we were brought to our table, we were table number six 6️⃣. There were 17 other schools at the competition. There were six questions per round and six rounds. After the third round we were given goody bags with popcorn🍿, juice🥤and a FAKE twix🍫. For the first 4 rounds we were given 10 minutes and, as the last 2 rounds were harder, we were given 15 minutes. At the end of the competition it was a tie between St. Olaf’s and Oatlands N.S. There were 3 rounds of tiebreakers but they both got them wrong so it was a tie for first place 🥇🏆. We came sixth even though we were only 7 points behind them. It was lots of fun and we really enjoyed it. Thank you 🙏 Ms. Masterson for coming with us and for giving us no homework 📚!!!

On Monday 18th November we were lucky enough to be invited to Wesley’s musical, We Will Rock You. Miss Masterson, Mrs Shirley and Miss De Burca accompanied us. The character of the Hippy man opened up the play. The pantomime was about the future of music. There was a company called Global Soft and they were trying to make everyone a robot, but there were a group of rebels and they wanted to be set free. There was a fight and Global Soft won the first round but the rebels weren’t finished. Then there was an interval and the lovely staff gave us biscuits and a drink. There were some students selling other things like chocolate and coke. Then the musical started again. The second half was about the main character Galileo who started thinking he wasn’t the chosen one. His partner Scaramouche turned out to be the guitar player and Gaz (as Scaramouche called him) was the lead singer with the hippy man. In the end the rebels won, but Taylor Swift died☹️. It was a very good play and was very enjoyable to watch. Thank you so much Miss Masterson and Wesley for the wonderful evening. 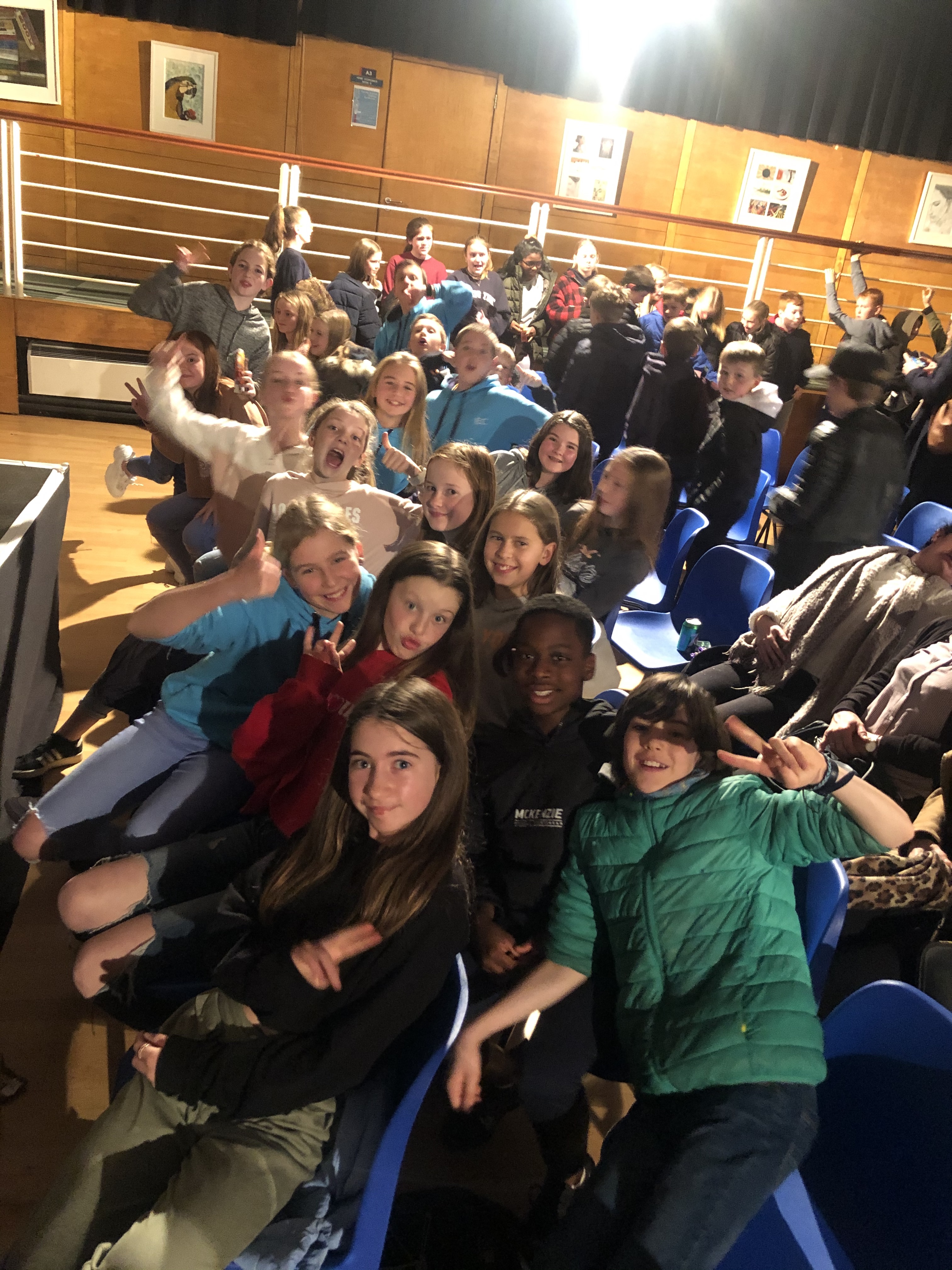 SIXTH CLASS
Create a free website or blog at WordPress.com.